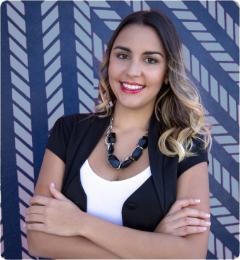 There's more info in my Foliobook.

Eneida Pinon is a licensed architect in Florida and New York who is working in New York City and is focused on expanding her ever-growing knowledge of architecture and design with international experiences and collaboration in the field. She graduated from Florida International University with a Master of Architecture degree and certificate of Architectural History and Theory in April 2014. She became LEED AP BD+C accredited in October 2016 and was licensed as a Registered Architect in Florida in January 2018 and New York in December 2018. She participated in two study abroad programs to Genoa, Italy and Tokyo, Japan. Her work has been displayed in the FIU School of Architecture's BEA Gallery several times as well as in the University of Genoa in Italy.

Eneida currently works in the heart of New York City with Gensler since June 2018. She previously had worked at Goshow Architects in New York, and ADD Inc. (now Stantec) in Miami. Prior to her professional career, Eneida worked at a model making company where she developed professional 3D architectural models and also worked at the FIU School of Architecture digital lab. She has also been invited to FIU as a guest critic several times.

Being able to represent the community's culture with design is one of the most important tasks of an architect.

Native to English and Spanish. Conversational with Italian.

International experiences have broadened her understanding of architecture.

Four years of professional experience in the Private and Public sectors working in Miami, Florida and New York City.